Think: PLANT A MULTIPLYING Gospel  instead of EXTRACT people so we can “disciple” them in church.

It’s very possible that I’ve learned more about the nature of spreading the Gospel from watching zombie movies than going to seminary.  True story.  At the very base level, the zombie apocalypse occurs because infection infiltrates relational networks.  Friend bites friend, wife bites husband, zombie-dog bites neighbor (I’ve seen weird zombie movies).  It spreads because people within relational-networks pass the infection from one person to another in the places where they interact and live their lives.

In this sense, Jesus was the best and greatest zombie… and not just because he was once dead but is alive again (ba da ching)!  Jesus showed an uncanny ability and brilliant strategy of pressing into new networks.  A couple examples of this:

1) Levi and his tax collector friends.  (Check out Mark 2:13-17) – one day Jesus is walking along the shores of the Sea of Galilee and he sees Levi, also known as Matthew, and he says the two words at the heart of being a Christian, “Follow Me.” So Levi immediately gets up, leaves his business and his money, and follows Jesus. After a quick scene change suddenly Jesus is at a legit dinner party with Levi and his buddies.  And let me tell you, Levi was no Mother Theresa, and neither were his friends.  This was a dinner party full of tax collectors… who essentially were the most hated crew of people among the Jews.  They were traitors (working with the Roman Government) and extortioners (overcharging people to get rich) and straight up sinners.  And it’s not like they were misunderstood… Tax Collectors were not good people. So the Pharisees get wind of this so-called holy man eating with these people – and they ask his Disciples, “why does Jesus eat with tax collectors and sinners?”And Jesus hearing them (with his super hero hearing ability) said – It’s not the healthy who a need a doctor, but the sick.  I came for the sick.

Did you catch his multiplication strategy?  It’s easy to overlook…  Jesus finds a dude on the margins who responds to the call of God, and then presses into his relational network so that those who would probably not seek out ‘church’ on their own initiative are suddenly discovering Jesus together.  Zombie-Jesus strikes.

2) Demon-Possessed dude from Gerasa (Mark 5:1-20) – Another time Jesus turns to his boys and says that they should cross the Dead Sea (no reason was given).  After almost getting dominated by a huge storm (which Jesus in-turn dominates simply by telling it to shut-up… no big deal) they land in Gerasa – one of the 10 cities of the Decapolis (10 automous cities of the Roman Empire – although in Palestine, these cities were far more Gentile and Roman than Jewish).  There Jesus meets a dude who is possessed by a whole legion of demons.  After some back-and-forth with the trembling demons, Jesus casts them out and they go into some pigs (I know, kinda weird…).  But this is when it gets interesting… word started to spread like crazy, and people didn’t know what to do with this.  They were afraid and pleaded with Jesus to leave.  But the formerly-possessed man, the one who is totally transformed and restored after encountering Jesus, pleads with Jesus to go with him.  The text says he begged Jesus.  Begged him.  And Jesus does what doesn’t make sense to us pastors in the West: he says NO.  Instead he tells him to go home.  Go to your family.  Go to your friends.  Go to your relational network and proclaim all that Jesus has done.  Infect them… you’re no longer demon-possessed (but now you’re a Gospel-Zombie).

Why would Jesus tell someone who desperately wants to leave his network to follow him “NO?”  Because Jesus is smart.  He’s strategic.  In fact, if you take a step back and look at the whole story, you see that this was the entire point of going across the lake in the first place!  Who saw that coming?  Who would have figured that the best dude to reach this whole other group of unreached people would be the brother filled with demons who lives in a cemetary and cuts himself with stones?  That only makes sense in the Kingdom. But that’s Jesus’ strategy of multiplcation: He infected this dude, and next he tells him to go infect others (It’s awesome, because this is different than what he tells a lot of Jews he healed.  He often told Jews not to tell anyone about him, because it will be revealed later, but to the uncreached he says Go and infect…).

Jesus pressed into networks.  He knew that they best way to spread a message is to allow it to travel through natural relational connections.  It’s how the Gospel has always moved throughout history.  It’s social networking… ya know, old school style.  And it aggresively challenges the methods of how we “disciple” people in Western churches.  Check out the very detailed and complicated chart below… 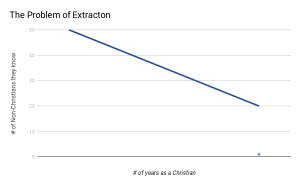 The sad but realistic picture is that the longer we follow Jesus the less unbelievers we know.  That’s actually embarrasing to even type, but we know it’s true.  And we know it’s messed up.  But that’s the paradigm we have.  You know who else had that paradigm? The Pharisees.  The word “Pharisee” actually comes from the root word in Aramaic that means “To Seperate/To Distinguish.”  I know we like to think that Pharisee and Bad Guy are synonymous terms, but the reality is that we function like the Pharisees.  We too separate ourselves so that we can be disciped in healthy environments. But here’s the catch: Jesus is on the move in the margins.  The margins are often not pretty.  Jesus calls us to join him in his mission.  Therefore, our role is not to extract ourselves or others from the lost, it’s to infect them with the truth and love of Jesus!  Extraction discipleship doesn’t do that.  Extraction discipleship creates an us-vs-them dichotomy that absolutely halts the movement of the Gospel.

When Jesus left his disciples with their marching orders – his final and primary commission to them, he said to Go and Make Disciples.  Go and replicate what I have done with you.  Go and multiply my efforts.  And as people become disciples, they too take on the primary task of a disciple, which is to replicate themselves.  Multiplication is embedded at the very core of the Great Commission.  If our entire goal is to extract people from their networks, “disciple” them in church until they’re “equipped” to go back out, than instead of viral Gospel movement, we get Gospel-Quarantine.  The Gospel Virus doesn’t spread when it’s isolated. It must be unleashed.  It must penetrate new environments and it must be released to new networks.  We tend to disciple the mission of our best missionaries: the newly transformed.

Disciple Making Movements around the globe understand all of this.  The Gospel of the Kingdom of God cannot be contained within the educated.  It can’t be controlled by the few.  The Spirit of God is on the move ‘out there’ and we must join him to see the fruit we long to see.  We have to learn how to come along side new believers, to press into their networks, and plant the Gospel in new ground.  This is how Jesus operated.  This is how Paul operated.  This is how the Gospel is spreading all over the world even as I type this.  And if we are to see similar fruit, this is a mindset shift we must make.